Some of the mathematician panelists serve in industry professions, while others are completing their coursework or teach and research at the university level.

The NMF Live Game Show was hosted by Albert Sykes, Executive Director of IDEA: The Institute for Democratic Education in America (opens new window), a supporter of public education for children in the U.S.. He is a graduate of the Young People’s Project, having begun with Bob Moses and the Algebra Project 26 years ago, at age 11.

"Math doesn't need to be hard, and most people know much more math than they realize. Join us for a fun game show in which mathematicians take turns demystifying seemingly complicated concepts through accessible and thought-provoking presentations! - John Urschel, Ph.D. candidate in mathematics, MIT; Former NFL Lineman, Baltimore Ravens 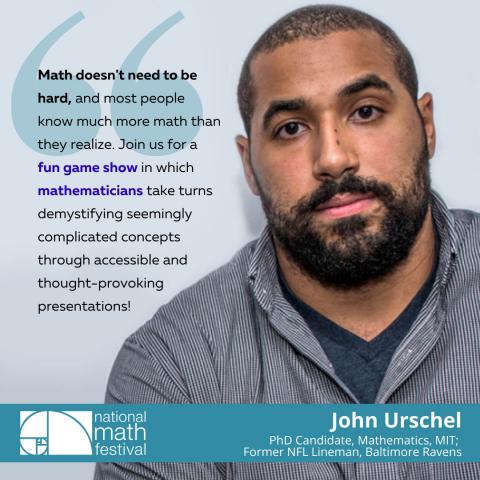