You can now view the January 27, 2021 NMF Live Performance Series (opens new window) event featuring a pre-recorded performance of the play Witches of Agnesi followed by a panel of four women mathematicians, including playwright Dr. Susan Gerofsky. Check it out below, along with free resources shared by our panelists!

Witches of Agnesi is a play that brings together three women mathematicians—Maria Agnesi, Sofya Kovalevskaya, and Emmy Noether—from three centuries in a mysterious meeting place outside of ordinary time and space, where they share a pot of tea and tell the stories of their lives and careers. The title draws on a deliberately mischievous mistranslation of Maria Agnesi’s ‘curve of Agnesi’ to ‘witch of Agnesi’. Each of the protagonists has a song, in the style of her place and time, revealing aspects of her life and work. This play should leave you with ideas about the important work women mathematicians do, and questions about why women have faced so many barriers.

(You may also access the play performance as a stand-alone video (opens new window).)

Live Panel Discussion on Women in Mathematics (Starting at 1:05:37)

This event was hosted by Albert Sykes, Executive Director of IDEA: The Institute for Democratic Education in America (opens new window), a supporter of public education for children in the U.S. 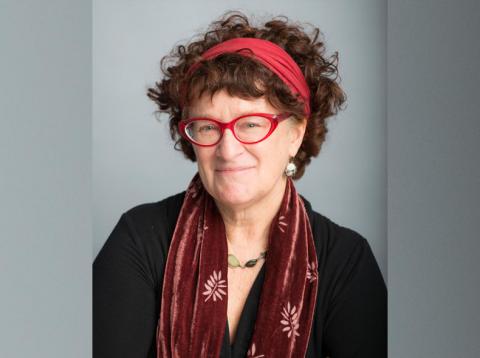 Some highlights from the audience Q&A with playwright Susan Gerofsky:

Why these three women in particular? "Someone asked how I chose these three women mathematicians out of all the possibilities. My answer: It wasn’t easy! There are many worthy choices. I decided to keep the number small so that we could really meet them all. And I ended up choosing mathematicians whose lives were fairly well documented and who had memoirs or accounts of their lives and feelings. I also realized after the fact that these three mathematicians had some biographical similarities with me…so I guess we all look for representation in some way!"

Why are the three leading mathematicians played by two actresses each? "Skona asks: 'Is the double casting part of the play directions?  Are they older/younger versions or otherwise distinguished or just two copies?' My response: I decided to double each of the key mathematician roles for a few reasons: 1) First, one could be saying the lines with the script and the other moving and acting (though it didn’t quite turn out that way!), and 2) It would give these women mathematicians more stage presence, and give women actors more roles."

Did these women go to school? "There were some earlier questions about whether these three mathematicians went to school or not. Answer: In the 1700s and early 1800s, there was no such thing as a public school! They all had some private tutoring at home, and support from their families in learning. Emmy Noether did go to school. As women, they were blocked from university classes, so they had to either sneak in and listen to lectures, and/or have private tutoring with a professor, or learn on their own. In my view it is absolutely ridiculous and horribly unjust that ANYONE be banned from learning, because of gender, class, race, ethnicity, religion, age, or any such factor!"

Can we perform this play in our community? "This is a scripted musical play. I plan to publish the script this year and to make it available to school and other groups who might want to perform it. I would LOVE to have schools perform the play, and there would be no charge of any kind. I’m hoping to publish it in the Journal of Humanistic Mathematics in the next six months or so." (We'll keep you posted when this happens!)

About this performance: "It took several months to write the play, about 6 weeks to rehearse this production, and it was filmed in an hour (and edited over several months). George S. asked: “Why do they have scripts? Did they memorize it?” My response: We produced the play in a very short time (4-5 days of rehearsal in the middle of a conference for the Stockholm production, and once-a-week rehearsals for 6 weeks for this production. I designed the play so that the players could work with script in hand and still be effective. I hope it works for you! With more time, people could memorize the script, of course."

How did you cast these actors? "Great question! At the Bridges Math and Art conference (opens new window) where the play premiered, we have the tradition of performing a mathematical play every year, so there was a ‘company’ of us to start from. Then we put the word out, and other wonderful actors, singers, musicians and crew joined us! (I’m SO glad that Dr. Nancy Scherich stepped forward to do this, by the way! She is an amazing musical theatre performer, choreographer, etc. as well as a professional mathematician!) In Vancouver, I contacted people I know from my university — teacher candidates, graduate students  — and people I know from the East Van arts and music community, and from my wonderful Morris Dance group (Tiddley Cove Morris). That’s where most of these super-talented folks are from!"

View the word cloud generated from event participants who were asked to share a characteristic of a mathematician: 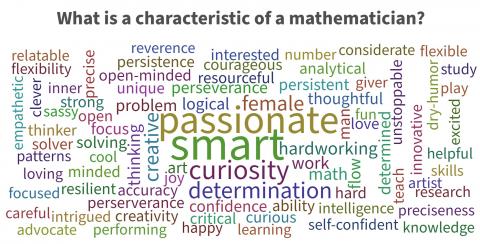